Illuminated clock is restored to Wisbech

Dann’s Clock was made and installed outside his shop in Wisbech by James Dann in 1864 who was a well-known clockmaker and watch repairer. His building had housed a clockmaker since the 16th century. Dann’s Illuminated Clock was one of a number of outside clocks erected to help people who could not afford clocks or watches to keep track of time in the nineteenth century.

Bill Bruce of WF Bruce Antiques had the foresight to buy and return the illuminated clock to its original home, on the side of what is now W H Brown, in Bridge Street, Wisbech. It was removed in 2012 by Diana Beck when she sold the building to an estate agency, William H Brown. Branch partner David Staveley wanted to buy the clock but Ms Beck did not want to sell it.

“Dann’s Clock was an illuminated clock and a meeting point for people in Wisbech.” (Richard Barnwell)

Erbie Murat, the town clerk at Wisbech Town Council, said the watchmaker James Dann had received a salary from the council at one point and suggested Dann’s Clock could belong to the town.

He also said the removal of such an historic clock ought to require planning permission because it’s in a conservation area.

Mr Murat said: “Fenland District Council, we believe, should have the power to put it back.”

But a spokesman for Fenland District Council said like other outside clocks, it’s not on a listed building in Wisbech so there’s no legal protection. He said: “The clock is obviously a very attractive feature that we’d like to see maintained.”

“However, it belongs to the owner and we have no powers to intervene.”

Unfortunately, Ms Beck transported Dann’s Clock to London and then sold it at Bonham’s auction where it was bought by Bill Bruce. He remembers it took two men to carry each cast iron bracket used to hold up the illuminated clock.

Mr Bruce expected the clock would be quite small so he got a shock when his friend delivered it, none too pleased by the level of exertion involved in transporting it.

Bill bought the illuminated clock while he was waiting to buy another clock at Bonhams. He quickly became curious to know where it came from. He knew of the owner from the Bonham’s record and looked on Google to see which building had displayed Dann’s Clock.

Realising it belonged to the people of Wisbech and should not have been removed, he made contact with Richard Barnwell who is a member of the Wisbech Society and Wisbech Rotary Club.

Richard Barnwell bought the clock from Bill Bruce and sold it to the Civic Society. He said: “Dann’s Clock was an Illuminated clock and a meeting point for people in Wisbech. There are photos of it in the local museum.

“Bill is an absolute gentleman. He knew of my auction house. He went online to do some research and called me up to tell me he had the clock. I was delighted that we got the clock back. It’s in the conservation area, and the council has a duty to protect significant features like outside clocks.”

“Bill sent the door, we enclosed the movement in a glass case in the office of estate agent WH Brown. You can see the pendulum moving in the case. There’s a hole in wall to the shaft on the outside. The illuminated clock stands near the Memorial to Thomas Clarkson which was modelled on the Albert Memorial in Hyde Park.

“It’s an important part of a street scene. I’m a Wisbech collector. I do my best to engender the history of our town, we have a wonderful history and future, 10,000 new houses are planned which will sustain more shops.

“James Dann made and sent clocks all over the world. The illuminated clock was a very big deal at the time. I would meet friends before a dance under it. It’s an important fragment of social history. As you get older, you look back on happy times. Nostalgia gets more and more important. It was an exciting adventure to go that far south to collect the clock from Bill Bruce.”

Mr Barnwell is a Vice Lord Lieutenant who represents the Queen, past chairman and Vice President of the Wisbech Civic Society and Rotary Club.

Both societies then paid Bill Bruce for the illuminated clock which he sold back at cost because he understood that Dann’s Clock, like many outside clocks are an important part of any town’s heritage. The clock also needed to be restored – purchase and restoration cost a total of £5000.

Wisbech Society Chairman, Ray Johnson said: “It was a bleak day for Wisbech when the clock was removed from its home of the last 150 years.

“The town had suffered another blow to its pride and heritage, but by good luck and the expenditure of £5000, the clock is now home to re-join Mr Dann’s other jewels in Wisbech’s crown – the clock in St Peter & St Paul church, built in 1886 and the 23-bell carillon in the Wisbech Institute clock tower, built in 1887 to mark Queen Victoria’s golden jubilee.” 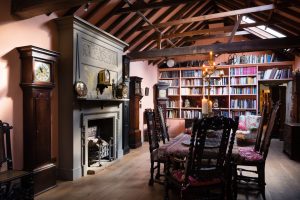 Bill Bruce is expert at spotting, purchasing and restoring antique clocks including outside clocks, longcase clocks, antique lantern clocks, mantel and carriage clocks. He has a Christmas exhibition on throughout December so why not treat the family to a clock for Christmas?

Pop into his showroom at 5 North St, Lewes and follow him on Instagram and LinkedIn to see what he has for sale.