Antique clock is restored to Hanningtons

For 136 years since 1865, busy shoppers and passers-by relied on a spectacular turret clock at Hanningtons department store to tell the time. In 2001 the shop closed and it was only due to the foresight of Bill Bruce, Lewes clock restorer who bought it and saved this turret clock, its clock mechanism and many other antique clocks for future generations to enjoy.

Today it’s fully restored and its beauty is on display for all to see. This antique clock is so much more elegant than a fit bit watch and you can see all of the clock mechanisms!

This turret clock used to sit above the Hanningtons shop front on Market Street, Brighton and has been restored to the Lanes. Bill Bruce is an antique clock restorer who runs WF Bruce Antiques in Lewes. He tendered and bought the clock at Gorringe’s antique auction when Hanningtons closed their shop twenty years ago. 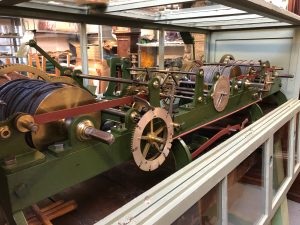 The three train turret clock mechanism was made by Edward Funnell in 1865. It has a ‘dead beat’ escapement to ensure accurate timekeeping. It also has an hour and quarter-hour bell chimes that would have been manually rewound every week. The three weights were 90 to 160 lbs and used to drop three storeys into a void below in the course of the eight-day cycle.

These days the rewinding of the weight is performed by an auto-wind motor, designed by turret clock specialists Gillett & Johnston of Edenbridge. Sophie Coombes-Winyard said: “The lovely three train clock which was restored brilliantly would normally be wound manually but with modern technology, this has been adapted to allow an ‘autowind’ unit. It is a Gillett & Johnston EPC automatic winding unit which is a compact unit that has been designed to lift the weights whilst continually maintaining power to the gear train throughout the winding operation ensuring no loss of momentum to the movement.”

Redevco bought the antique clock for the Hanningtons estate

When Redevco obtained planning permission to redevelop and create Hanningtons Lane, they heard about the clock through Mr John Drury who knew Bill Bruce and enquired about the clock which was still in Mr Bruce’s possession at WF Bruce Antiques. He agreed to sell the turret clock to Redevco and is very excited that his antique clock is to return home to the place it was designed for.

Mr Bruce said: “I’d never considered the possibility that this was going to happen.” He suggested to Redevco that they place the clock where everyone can see it. The clock is now in the window of one of the new shop fronts with an information plaque explaining its age and origins.

He said: “I don’t think I’ve ever worked for someone who took so much trouble to restore a clock and present it in such an elegant way. Redevco does deserve credit.” 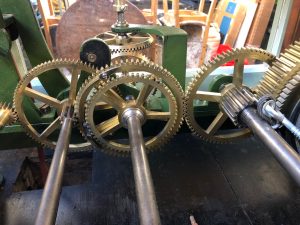 Andrew Foulds, Portfolio Director at Redevco, owner of the redeveloped Hanningtons Estate said:  “When I first contacted Bill my thoughts were to try and re-attach the mechanism to the clock face overlooking Brighton Square – however when he explained that the clock mechanism was a museum piece and should be on display, I was beyond curious!

“His enthusiasm was matched by my own in wanting to repatriate what I subsequently saw was a piece of fine Victorian engineering made originally in Brighton Lanes itself. I found a shop window where we can permanently house the clock mechanism with a  backdrop explaining the history of Brighton, Hanningtons Department store and the clock itself.

“We are incredibly proud of the scheme and finishing touches which have a genuine connection to the past. It’s worth the considerable efforts of everyone in getting an auto clock mechanism attached by Gillet & Johnson and our Design team in providing the platform to showcase this. 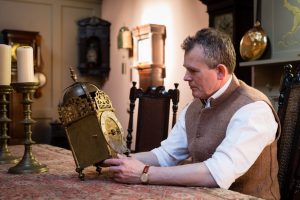 Bill Bruce in his showroom at WF Bruce Antiques

“Thanks must go to Bill Bruce for having the foresight to rescue the clock and painstakingly restore it. Bill has ultimately been far-sighted in rescuing and renovating the clock and I hope being able to return this to its original home in a high profile location for all to enjoy, is in some way a reward for his hard work and passion.”

You can pop in to meet Bill Bruce and see all of his other antique clocks in his showroom at WF Bruce Antiques, 5 North Street, Lewes.

Why not visit his clocks page? You won’t regret it. If you want to see more antique clocks that Bill has restored, follow us on Instagram or look Bill up on LinkedIn. He’d like to stay in touch.