The English lantern clock, or ‘house clock’ as it was known during the seventeenth century, first appeared in its familiar and well-loved form around the year 1600, at the end of the Elizabethan age. It was a direct development of the iron clocks, generally called ‘Gothic’ clocks, which had been made by clockmakers across Europe but particularly in Germany, France and Switzerland and which wealthy households in England, requiring a convenient domestic clock, had imported into this country.

These iron clocks, apart from some elaborate sculptural and almost jewel-like spring table clocks affordable only by the extremely wealthy, were really the only available domestic clocks during the Tudor era from the reign of Henry VIII onwards. It is not known if there were any native English clockmakers making domestic clocks at this early date but we do know that King Henry imported foreign clockmakers, such as Nicholas Urseau who was possibly French and working in London, at Hampton Court, by 1531. There is, in a private collection in this country, an iron ‘Gothic’ clock with a brass dial which is punch engraved along the top with the name ‘Mr John Mere of Salisbury’. Although there is an elaborate, but almost indecipherable, inscription along the bottom of the dial, which includes the date 1567, it is not clear whether John Mere was the maker or owner of the clock. 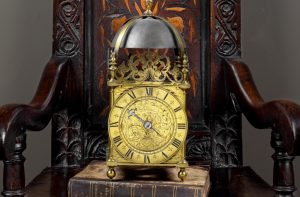 Iron ‘Gothic’ clocks are a miniature version of the tower, or turret, clock. These turret clocks were being made by blacksmith-clockmakers and they were slowly spreading across the country into church towers and other public places. The population of England was reliant on these public clocks for their time keeping, as domestic clocks for use in the home were unavailable except for the very rich. However, evidence does exist for the early use of domestic clocks, in home surroundings in contemporary art. For example a working drawing of 1528 for a painting, now lost, by Hans Holbein, the Younger of Sir Thomas More and his family sitting in a group with, in the background, a ‘Gothic’ clock hanging on the wall.

Who actually made the first English lantern clock version in brass, of the iron clock, is not known. At the turn of the seventeenth century there were only a handful of clockmakers working in this country, mainly in the Blackfriars area of London and many of these were refugees seeking to escape religious persecution from catholic Europe. Some of these clockmakers have subsequently become quite well known, such as Francis Nowe and John Vallin and especially his son, Nicholas.

In the Victoria and Albert Museum in London is the earliest known domestic ‘chamber clock’, which can be proved to have been made in England. It is signed frauncoy Nowe fecit a London 1588. This clock is in an elaborately engraved brass case and although not of the familiar lantern clock design, with exposed pillars, it is very much recognisable as a forerunner of the lantern clock but, unfortunately, the mechanism of the clock itself is a later seventeenth century replacement. There was a tragic, but all too familiar, outbreak of plague in London in 1603 during which many thousands died including Francis Nowe and both John and Nicholas Vallin. However, it should be recognised that as they made the first weight driven chamber clocks that can be definitely attributable to makers working in England, then Francis Nowe and Nicholas Vallin must be regarded as the fathers of the lantern clock as we have come to know it.

The earliest known surviving English lantern clock is now in the United States of America and it was made by Robert Harvey, a clockmaker who became a Freeman of Oxford in 1588 and subsequently moved to London and worked in Little Brittain, near St. Paul’s Cathedral. Robert had a younger brother, Thomas, who was apprenticed to him and to whom Robert left his tools and a clock when he died in 1614. The lantern clock in America by Robert and one lantern clock signed by his brother Thomas were thought to be the earliest examples of the English lantern clock to have survived. One other clock by Robert, a wall alarm clock, is known and is thought to be in a collection in Switzerland.

In February 2003 another lantern clock by Robert Harvey was discovered in an auction of early oak furniture. Therefore, at the present time, four lantern clocks from the Harvey workshop, two by Robert and two by his brother Thomas, are believed to be the earliest surviving English lantern clocks.

Clocks made before the introduction of the pendulum in 1658 were of only a very short duration and needed to be wound both morning and evening. The wheels of the clocks were marked out on a dividing plate and the teeth cut by hand with saw and file. It was impracticable to make many wheels with high numbers of teeth using this method and consequently the trains were rather coarse. A running time of about twelve to fifteen hours was normal, depending on how high the clock could be hung on the wall to allow the maximum fall of the weights.

After the introduction of the pendulum and the advances in clock-making technology that came about at that time, clocks of much longer duration could be made. The longcase clock appeared at about the time of the restoration of King Charles II and these could be made to go for periods of thirty hours, a week, a month or even longer up to a year in exceptional cases by the finest clockmakers. The spring-powered table, or bracket, clock became popular too, as a portable clock that could be carried about the home.

However, throughout the towns and villages of southern England and occasionally farther north, the English lantern clock remained popular and continued to be made in some numbers especially in East Anglia and the West Country around Bristol, well into the 18th century. These clocks accommodated the latest technology utilising finer wheel cutting and escapements and were now made to go for a full thirty hours. There still survives a lantern clock made in 1672 which goes for a week, but this is an exception and probably unique.

From early in the seventeenth century ‘special’ lantern clocks were occasionally being made. These could be in the form of large clocks, now generally called ‘chamber clocks’, which were probably intended for important public areas such as city great halls or meeting places. The earliest known surviving example for which we have a definite date is a large chamber clock by William Bowyer dated 1623 and we were fortunate to be able to exhibit this and another large clock by Bowyer, dating from about 1640 in our 2013 Exhibition.

Another ‘special’ type of lantern clock was one that chimed the quarter hours. These must have been very expensive clocks, especially in the early days, as very few that did much more than a simple extra strike on the half-hours are known in the era before the pendulum. By the middle of the century some of the finest makers, especially perhaps Peter Closen of Holborn, were making very elaborate quarter-chiming clocks, some being the size of great chamber clocks. By the end of the century clocks that could be loosely termed ‘musical’ lantern clocks were being made. These clocks invariably had both hour and minute hands to assist with setting and releasing the quarter chime and hour strike pendulum in the middle of the century, to those with the long anchor pendulum.

Because of their great age most English Lantern clocks show the ‘improvements’ that have been carried out by original owners who decided they would modernise a cherished clock with a later and more accurate escapement, rather than exchange it for a new clock. The most common conversion is that from balance escapement to anchor and most of these conversions were made at the end of the seventeenth and the beginning of the eighteenth centuries. More uncommon is the conversion from balance to verge pendulum and these conversions were most probably made about 1659-1660, fairly soon after the first introduction of the pendulum.

On display in our 2013 Exhibition there was a fine example of this conversion in the large, unsigned, mid seventeenth century clock (catalogue13). The number of lantern clocks made before 1660 and still surviving with their original balance escapement is unknown but could certainly be counted on one hand. There were however, some clocks exhibited with re-conversions to balance which gave a good idea of how the lantern clock would have appeared when originally made. A fine example was the beautiful clock attributed to Thomas Browne of Bristol with the lovely copper dial (catalogue 8). Exhibited too were many examples from the second half of the seventeenth century with their original and unaltered verge pendulum escapements, some by West Country makers where the lantern clock remained particularly popular well into the eighteenth century.

A few Catalogues from both the 2004 and 2013 Exhibitions are still available to purchase from our Galleries here in Lewes.