A Russian Bear wrestles with Napoleon

WF Bruce Antiques are  selling an interesting clock made by Lewes Clockmaker William Hooker. It has an early 18th C  painted  dial that features Napoleon wrestling with a Russian Bear. The arch of the dial is based on a cartoon that was drawn by Mary Dorothy George and published by Walker in 1807 called ‘Boney and his Army in Winter Quarters.’

William Hooker was a Lewes Clockmaker who worked in Cliffe High Street for many years, certainly from 1795, probably earlier, until 1835 when he died. He called his premises the ‘Original Clock Manufactory.’  In 1827 he was imprisoned in the Fleet Prison as an undischarged bankrupt. It seems from historical records that Mrs Hooker, his wife, kept the business going during his imprisonment because he reappears in 1830 advertising for his last apprentice.

Mr Hooker would have bought the painted clock dial from a specialist firm. He would have made the movement, assembled the clock and commisioned the case if he did not make it himself. 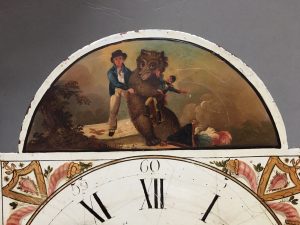 Lewes clockmakers were embedded into the very fabric of British society, with the painted arch of the dial reflecting the trends and concerns of the time. Antique clocks are living monuments to a bygone age and tell us a great deal about the period in which they were made.

This clock made by William Hooker is quite rare and he anglicised it to make the painted clock dial more relevant to his British customers. Mr Hooker left out the French, Catholic town crier sporting a rosary from the cartoon and added in John Bull, the personification of an Englishman.

In the original cartoon, the Russian Bear is typical of many cartoons of the eighteenth century and was first published by Walker in 1807. They were bawdy, satirical and aimed to make fun of their masters, particularly royalty, politicians and other known public figures.

In the cartoon  that forms the head of the painted clock dial, there is a pun on ‘snug as a bug in a rug.’ It’s clearly a prison where the Russian Bear is taking Napoleon and it is no palace. Napoleon could be the bug and this is a play on words because the bug is actually a bog or stream bringing to mind no man’s land or a battlefield.

Winter quarters reminds the audience of Russia’s Winter Gardens in St Petersburg and harsh Russian winters. Elysian relates to the Elysian fields in Greek mythology where heroes were conveyed after death, through Virgil’s Hades which is a river to Paradise.

At the top of the dial, the huge bear is symbolic of Russia, the squirming figure is Napoleon who has dropped a French tricolour hat on the ground. ‘Talby’, the second figure we think, represents ‘John Bull’, the personification of an Englishman whom Napoleon is appealing to for help and discretion during the Napoleonic Wars.

Ben Johnson from Historic UK summarises the character of John Bull, who was invented by John Arbuthnot the satirist (1667-1735.) In his series of John Bull pamphlets, ‘The History of John Bull’, he introduces John Bull as the typical Englishman: “an honest plain-dealing fellow, choleric, bold, and of a very inconstant temper” (from Law is a Bottomless Pit.)’ We think John Bull is the man on the right whom Napoleon is entreating in the cartoon and on the painted clock dial.

‘Boney and his Army in Winter Quarters’ was first published in a collection by Walker in 1807 which was during the Napoleonic Wars from 1803 to 1815.

In 1807 when the clock was made, revolutionary wars (civil wars) were ravaging France that gave rise to the Napoleonic Wars across Europe. Europe in the eighteenth century was characterised by battles over territory and the rising up of ‘the people’ which threatened the monarchies and aristocracy in many small states at the time. The French Bourbons were toppled during the French revolution and the military led by Napoleon took over.

Russia had a very unpopular Tsar and remains a huge landmass to control. Princes governed smaller territories under the Tsar’s overall control.  This was different to the situation in Germany and Italy. As an island Britain managed largely to stay out of the Napoleonic Wars but she formed coalitions and acquired a lot of territory as a result. 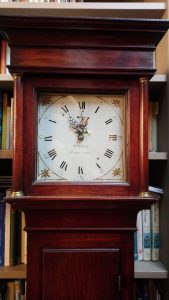 Another longcase clock made by William Hooker

Bill Bruce has an extensive library in his showroom as well as other artefacts including an interesting range of longcases with painted clock dials, lantern, bracket and wall clocks. Bill is a master craftsman with a workshop below his showroom where he is involved in very intricate and significant antique clock restoration and conservation.

WF Bruce Antiques will be open from Tuesday to Saturday for a very special Christmas exhibition that runs until Friday 20 December. If you are interested in seeing the clock made by Lewes Clockmaker William Hooker, come and visit Bill and see what other treasures he has for sale at 5 North Street, Lewes. To keep in touch with Bill Bruce and make sure you don’t miss any of these articles, don’t hesitate to follow him on LinkedIn or Instagram.

We are very grateful to Marion Smith, social historian from WF Bruce Antiques and Lewes History Group who provided information for this article including the original cartoon.